IT in Africa – current trends

The power of Internet connectivity is vital for Africa as a nation to embrace information, education, communication and overseas commercial opportunity. The privatisation of African IT monopolies is resulting in the provision of increasingly cost effective IT services. Local and international companies look set to reap the rewards. What does it mean for African students?
While there is a lot of ground to make up before the continent will be able to cater fully for the IT needs of its current commercial boom, the good news for African business and education providers is that growth rates in key areas of Africa’s telecoms sector continue to be among the fastest in the world.
The traditional paradigm of high telecommunications costs is gradually receding across Africa, and the majority of telecommunications growth and development will almost certainly be seen in the mobile and wireless sectors in upcoming years. Currently in Uganda, the capital city Kampala is about to install wireless access points across the city giving trial free access to the 2 million people living and working here.
Mobile users now account for 85% of all African telephone subscribers, a higher ratio than any other continent. Other wireless technologies like WiMAX will allow Africa bypass traditional technologies and substitute fixed line telephones. This rapid development will facilitate general African business activity which will need faster transfer rates. By twinning with local partners, schools and colleges will be able to piggy back on the local business network which if wireless would only mean purchasing a small wireless receiver. In terms of providing education, technologies like these are invaluable for connecting student to teacher and student to online curriculum. What starts out as an environment for entertainment soon allows the application of education, a complete 180 from the days of CERN and Arpanet.

Also significant for Africans is the fact that VOIP (talking over the internet e.g. Skype) is becoming more popular and several countries have already embraced on initiatives to roll out Next Generation Networks (NGN’s) which will enable the delivery of merged voice, data and video including VOIP, Internet access and Broadband TV. It is exactly like Richard Branson’s Virgin Media service operating in the UK. One wire, many services.
Most impressive is the the deployment of WiMAX systems. WiMAX is considered to be a key future communications technology set up to enable national wireless capabilities, even to those in remote areas like Buwama near the equator. 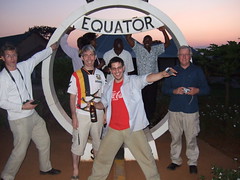 Although Africa currently lags the rest of the world in terms of IT infrastructure and systems, they will effectively leapfrog to the latest technologies. For example, Senegal has one of Africa’s most modern telecommunication infrastructures in the country, with Internet usage doubling every year since 2003. The bad news is that some of the least well off countries and those who are struggling with internal problems will be left behind as will remote regions. Each Camara computer is sent networked for the future and some of them are already connected to the Internet in fully networked computer rooms providing access for students, but we also focus on preparing each computer to be a stand alone library while they wait for that cable. This week entertained the first Camara computer classroom that was fully networked in a Windows/ Linux environment and connected to the Internet, we take it for granted in the developed world but Kibuli Girls Secondary School in Kampala has just taken an technical leap that will change how computer education is taught in that computer room. 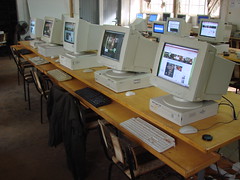 As soon as they were connected, their standard library became obsolete.

Although most of the technologies mentioned will be commercially based with little or no room for poor schools, the cost of installation and the availability of second hand equipment will in any event make it affordable in the future. The training required for maintennce and installation of these technologies could hopefully be sourced inhouse for a change.

We use cookies to ensure that we give you the best experience on our website. If you continue to use this site we will assume that you are happy with it.OkRead our Privacy Policy